Falling in Love at Creekside Oaks

Falling in Love at Creekside Oaks 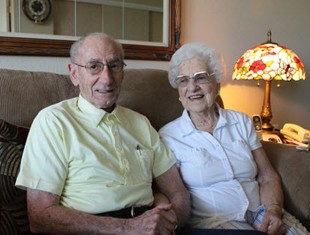 Donald and Mickey Vaughn
When you meet Don and Mickey, it’s easy to see they are a fun and playful couple. They poke and giggle at each other in exercise and tease each other out on walks. The love they share is also obvious– their eyes light up when they talk about their past together, how they met, and their family. They speak of how proud they are of their family, their children’s accomplishments, grandchildren’s successes, and the sweetness of their great grandchildren. Mickey loves when her grandchildren or great grandchildren call just to say “I love you.” 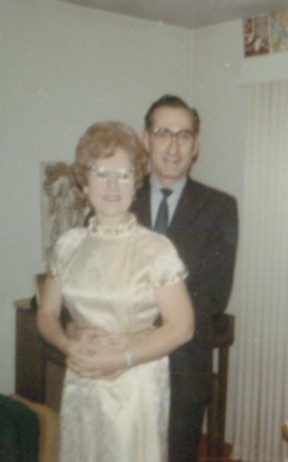 Don and Mickey have a very sweet story – they grew up together in Oregon, where Mickey’s family had moved to take advantage of the Homestead Act. They went to school together starting at a young age and Mickey would spend much of her time at Donald’s family home because of school and the other children. Mickey’s family became very close with Don’s family with all the time they spent together. Later when they went to public school, Don would throw rocks at Mickey while they waited for the bus. Mickey would go home and tell her mother “she didn’t like that Donald Vaughn very much,” and her mother would laugh and assure her he was just trying to get her attention. It must have worked, because Mickey and Don ended up being high school sweethearts. Don and Mickey would go to dances together, where they learned new dances such as Latin dance steps – to the chagrin of their parents. They loved dancing together, and later dancing would be what drew them close again.

Following high school, Donald joined the military and went off to war, separating Donald and Mickey. Being overseas in Europe was an exciting time for Don – he was on the front lines and was spending his first time abroad, seeing the sights, and fighting in the war. Their lives went separate ways; they ended up marrying other people and starting families. After about 6 years, Mickey returned to Oregon to see her family just following her divorce and Don was home from the war. Her mother suggested she go visit the Vaughns, to reconnect and see how they were doing. Out of curiosity, Mickey asked if Don would be there with his wife. When she found out Don was divorced as well, she asked for the keys and drove over to the Vaughn’s home. Don invited her to a dance that evening, and they fell into the steps just like they had more than 6 years before. They were reunited after that day, and began their journey on the rest of their lives. Mickey says their reunion was the best moment of her life.

Donald went back to school after the war and earned his Bachelor’s degree to become a teacher. He later earned his Master’s in education and worked as a principal for 8 years at Don and Mickey’s old high school. After deciding that children were easier to manage than parents, Donald returned to teaching after he and the family moved to Napa Valley. He worked as an educator for 35 years, teaching junior high math.

Mickey and Don’s family began with Mickey’s son from her previous marriage, Wayne. They later had their daughter, Sanda, together – a very proud moment in Don’s life. Sanda was the first child of his own, but eventually Wayne changed his last name to Vaughn as a graduation present because Don had played such a pivotal and important role in his life – though Don can’t decide if that was a bigger present to Wayne or himself.

Donald and Mickey have had a happy and loving life together. They’ve overcome challenges and healed wounds. They’ve lived through the death of loved ones and stayed united despite health struggles. They’re fun, loving, affectionate and a joy to be around, and their positive attitude is infectious. Everyone needs a Don and Mickey in their lives. We are so grateful to have them in the Creekside family.