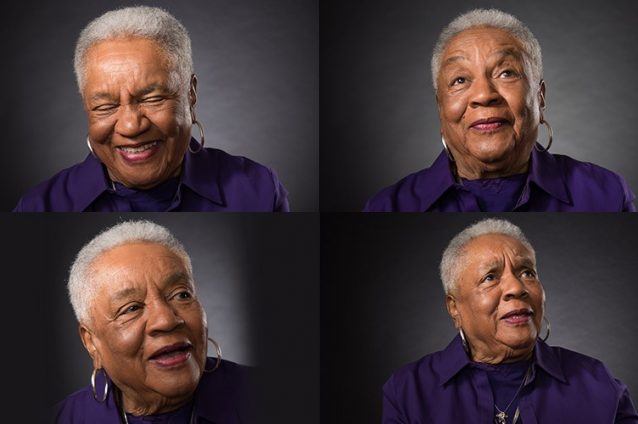 Q: What’s the most interesting thing that’s happened to you?
A: I… would say when WWII was over. I was overjoyed! I thought, this is it, there will be World Peace — I wanted to shake every serviceman’s hand and hug everyone! No more rationing! That I enjoyed.

And, probably the first moment I got my school incorporated. I always wanted to open a school. When I opened my secretarial training school, that was amazing to me. And, then I maintained a really good placement record and all my students would come back and tell me they got jobs.

Q: Where were you born?
A: I was born in St. Louis, Missouri in 1924 and I lived there through high school graduation. Then I moved to Chicago to attend City College; then I went to Northwestern. I was one of six kids, only two of us are left living now.

Q: What was your childhood like?
A: Well, I was born during the Depression, and when the Great Depression hit in 1929, I can remember standing in line with my dad waiting for the bank to open. We were poor, but we didn’t know we were poor.

My oldest sister called me “Me Too” — ‘cause that’s what I always said. I wanted to do everything she did.

I liked to skate in high school and I was a drum majorette, I was selected because of my posture. They came to get me my first day in high school, because they said their drum majorette was graduating the next year, she was a senior. I did it all four years. I learned how to twirl the baton and I was the drum major, so I gave all the signals. I couldn’t believe I was selected just because of my posture. That was a puzzle, but it was so much fun, we were in all kinds of competitions.

My oldest sister, Mabel and I, we were the dearest of friends. I was born on her birthday and they gave me to her as a birthday present, she was six years older. When I got to be a teenager and my mom said, “Louise can’t wear a skirt, she’s too skinny,” my sister took care of me. She had great love, she’s one of my blessings — I knew two people who possessed great love: Her and my first husband’s mother. I was fortunate.

Q: What did you study in school?
A: I went two years for all the requirements —English and science. I wanted to be an English major, but I didn’t graduate from Northwestern. After college, I worked for the government, the US Treasury Department in Virginia.

Q: How did you meet your first husband?
A: I was at school in Chicago. My sister and I had an apartment and a lady in our building arranged a gathering for us. I met him there. We were married 10 years, and had our daughter, Gaila. She lives in San Mateo now. I was a single mother for a while, but our families remained close. I loved my mother-in-law dearly and we stayed friends. I figured they didn’t get divorced, we did. So Gaila grew up knowing her father’s family and her father’s love. It was just natural for us. I was a single parent without the hardships.

Q: Did you remarry?
A: Yes, in 1960 and I had one child with my second husband, my son Haze. He was named for my dad and for Walter Haze. He’s out here.

Q: Tell us about the school that you opened.
A: We operated for nearly 20 years, and always maintained good enrollment. It was not easy to do, but it gave me a big sense of accomplishment. We taught Business English, Business Math, and typing and shorthand and word processing. This was in the mid-1970s.

Q: What gave you the idea and the courage?
A: It was something I just always wanted to do. I always made extra money by typing thesis papers for people. I always did it — even in high school I would type other kids’ papers, so it was something I was always involved in. And then teachers who were writing books had me type for them. We had to be incorporated, so I followed all the steps, there were not really any obstacles I couldn’t overcome. I found a place in University City, outside St. Louis. I took a mortgage on my home and I applied for a small business loan.

I was in the bank one day, talking to a banker, and the loan officer thought it was unique, and said, “We can do that.” So I took a small mortgage and had to learn all about CETA [the comprehensive employment training act]. They came out and looked me over — you had to bid for the contract — and once I got in, I had a good placement record. My students were well-qualified; they could pass the hiring tests they were subjected to. I sent them to the phone company, Blue Cross and Blue Shield, Brown Shoe, just places I knew about. I could always give them good references. It was funny at times, what you went through at school. And then with CETA they were paid to go to school, so you had do a lot of screening. I called it the Gaila Business School.

While I ran the school, I was still working for the government. I did both, then I decided after a number of years, after the Republicans came in and jobs were harder to get, I just closed it, disposed of the equipment and dissolved the school.

Q: Who were the most influential people in your life?
A: There were two very influential people in my life: My sister Mabel, and my first mother-in-law. I remember that my first words and love came from my sister (not my mom); she treated me like I was a little doll that she cherished. I would say that Mabel loved me more than she loved anyone else — but she made everyone feel like that! Mabel would do everyone’s chores. We lived in a house with white stone steps and we all had to scrub them every Saturday. My parents would leave Mabel in charge and Mabel would tell us to do it early in the morning. And she would scrub those stone steps so they would be perfectly white. She was the oldest. And she lived a very successful life.

Mabel was the type who, if you met her and then didn’t see her for 10 years, she would remember you. Me, she had to introduce me to her friends every time I saw them, just to make sure they knew me, but she always remembered the people she met.

And then Charlotte, Gaila’s grandmother, exhibited love to everyone, she was very self-sacrificing, she’d have six grandchildren over and be able to look after them all.

Q: Can you remember one of your happiest moments?
A: We always had happy moments, and we felt happy for someone else. If my brother got in trouble, and we could fix it so he escaped a whipping, we were all happy. We were a family of six and always had little hurdles, during the war, during the segregated days, but we found joy in each other, in someone else’s success, like someone’s kids being born, or someone else’s good report cards.

I even survived breast cancer 28 years ago in March 1986. I didn’t get chemotherapy, but I had surgery — a mastectomy — and the doctor got it all, so I got no chemo. Now they give it to everyone. I had no fear, and, looking back, that is a joy. At the meetings, people looked at me like this was the worst thing that could happen. I can’t say it didn’t bother me, I just thought all the anxiety was on the doctor’s part. I found the knot myself, went to the doc on a Friday and on Tuesday, I got surgery.

My life has been full of joy, so I’d be hard pressed to say which is the happiest moment. I can walk into this place where I live now — I never thought life would be so easy! I don’t have to write checks! And I’m here, not on a waiting list.

Q: If there is one life lesson you could give your children and grandchildren, what would it be?
A: I’ve worked all my life, so it was hard to spend the necessary time with my kids, but now they are so good, I’m not sure I was that kind of mama to them.

They both tell me they are so proud of me; they say, “You’re the oldest and you look the youngest.” Every day, Monday through Friday, I spend an hour on the bike. My prescription calls for 50 minutes of exercise 3 times a week. I don’t do the treadmill anymore, too much bouncing. I get on the bike at 6 in the morning, because there are only three bikes here, and no one wants to wait 60 minutes.

I have three grandsons, and I tell them all the time to want the best out of life. Just add, subtract, multiply and divide, and do what’s best for you. Don’t settle for mediocrity. Don’t say, “Well, I can’t have that.” Go for it.

I don’t know what they see in me, but my saying is — I have several with Haze — I say, “Thank the good Lord for that.” And if things are not going just right, I’d say, “All things go together.” and “Love is reflected in love,” and “What you see in the mirror is what you are putting out there. If you see and give love, it’s reflected.”

Q: Who were your heroes?
A: Thurgood Marshall was one. He was practically the only activist at first. He was a big man in statue and he was always being quoted. Every time I heard something he said, I would think that it’s so great we have someone to speak for us. And he really was the very first. In 1967, I was an adult and I could follow what he was speaking about. He was the first African American Supreme Court Justice and it was all on merit. I remember when Johnson appointed him and I heard he served from 1967 to 1991, when he died.

Q: What did Dr. King talk about?
A: His was the nonviolent message and he ended every speech with “Free at last, free at last, great God Almighty, I’m free at last.“ That must have been in the mid-1960s, somewhere along in there.

Q: Why do you think Dr. King was so important and touched so many people?
A: The way he mobilized the whole nation, how we responded to him and the stories you would hear about him, from people who were close to him, how determined he was.

I knew someone on his security staff, who protected him, and they would say how hard working he was. He would sit up nights and talk to them about how he felt and what they could do, and one-on-one, he was a person who showed interest, my friend said. He was able to explain how you could go forward in a nonviolent manner, and he was able to mobilize people, even young people who were willing to get spat upon. It was very sad when he was shot.

To read more stories like Louise’s, visit www.TheseEyesHaveSeen.com, or check back for our weekly resident interviews in the Sunshine Stories Blog.