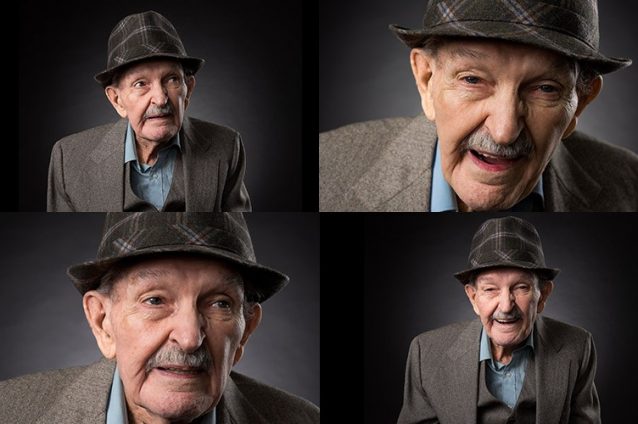 Q: Where were you born and raised?

A: I was… born in Pueblo, Colorado, on October 14, 1929, and lived mostly in California. I went to school in Pittsburg, California, and graduated from high school in 1947. I went to work on automobiles and became a body shop foreman for Cadillac/Pontiac. So, I worked on cars.

Q: Did you go into the service?

A: Yes, I served in the Air Force and went to Korea for a while, but I got out pretty quick. I was a courier for Air Force Headquarters, so I had to get top secret clearance. I ran back and forth to Seoul with important papers.

Q: Did anything scary ever happen to you while you were doing that?

A: They tried to bomb the bridge that I crossed every day, but they never did hit it, so I was lucky there. We tested equipment overseas and actually we started testing rockets over there [in Korea]. And then I lived in Florida for a while where they were building rockets as well. They developed the moonshot and all that stuff while I was there. They had a hanger there that held a B-36 bomber.

Q: Is this top secret?

Q: What did you do after the Air Force?

A: I moved back to Pittsburg, California and went back to work for the Cadillac/Pontiac body shop.

A:  Yes, I was married. My wife’s name was Doris Davenport.

Q: Where did you meet her?

A:  We met in high school where we both played in the band; I played clarinet.

Q: Did you stay there?

A: Yes, we lived in Pittsburg then moved to the mountains when I retired from the body shop. We lived up in Bear Valley. We separated and she passed away just a few months ago.

A: We have four: 3 boys and a girl, and they are all lawyers! I have some grandchildren, too.

Q: How are you related to John Muir?

A: I checked out my family tree and that’s how I found out that I’m related to [the naturalist] John Muir; the family tree revealed that I’m also related to Roberts Burns, the poet.

Q: Were you surprised?

A: I didn’t think I would be related to that many famous people, so yes, I was.

Q: Are there any lessons that you have learned about life?

A: I’d say I just try to get along with everybody and have the best life I could.

Q: What do you like to do during the day now?

A: I mostly watch TV — but I also go visit my relatives.

Q: Do you have a favorite movie?

A: I mostly like adventure stuff, Indiana Jones, Star Trek, some of the popular movies that are out now.

Q: What’s the one thing that most people don’t know about you?

Q: What would you say is the best part about getting older?

A: Probably getting to know all the different people all along the way.

Q: What is the worst?

A: Probably knowing that someday I’m not going to be here, and I’d like to be here as long as I could.

Q: What was your favorite thing to do with your family?

A: We loved going camping and waterskiing. I liked to go to Lake Shasta. Doris and I used to go over to Reno and gamble a bit at Harvey’s; never won very much, maybe $150.

Q: Do you remember a particularly difficult time in your life?

A: Probably when I lived in the mountains and had to come down here.

Q: What was your happiest time?

A: I don’t know, probably when I was traveling around when I was in the Air Force and then when I lived up in the mountains. I had lots of friends up there we’d go fishing a lot. We caught trout and salmon.

Q: Tell us one lesson you’d like your grandchildren to learn from you.

A: Go out and enjoy life and have as much fun as you can.

To read more stories like Sam’s, visit www.TheseEyesHaveSeen.com, or check back for our weekly resident interviews in the Sunshine Stories Blog.