Drinking Buddies. Drinks Are On Us. Drinks All Around! New Mugs Have Sunshine Residents Hydrating Happily

Drinking Buddies. Drinks Are On Us. Drinks All Around! New Mugs Have Sunshine Residents Hydrating Happily 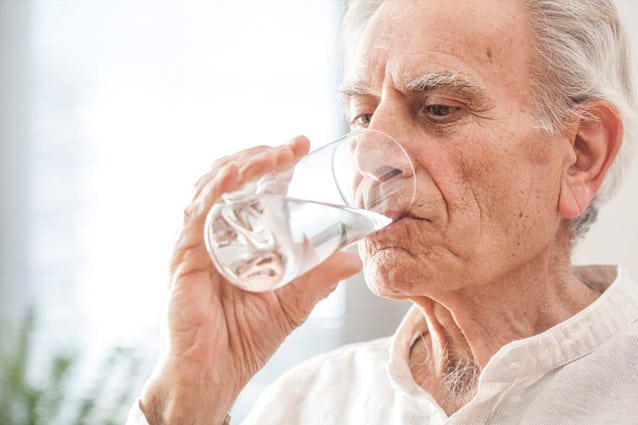 By now you probably know that many Sunshine Retirement residents share an appetite for healthy and haute’ cuisine. Some have a passion for poetry and reading books. While others have a desire for dancing and exercise. Of course, it’s natural for thousands of people from all walks of life to have a diversity of interests. But we’re on a mission to see that every single Sunshine resident has a thirst for one specific thing: Water.

On average, more than 60% of the human body is made up of water and adults lose more than 80 ounces of it per day through normal activity. With advancing years, seniors naturally undergo physiological changes that lessen their intake of water and increase their risk of dehydration – a phenomenon that happens when a person uses or loses more fluid than is consumed, and the body doesn’t have enough water to carry out its normal functions.

In general, seniors are not as physically active as they once were. They typically lose their sense of thirst and tend not to drink enough. Furthermore, as age slows down the metabolic rate, appetite decreases and they get less fluids from solid food sources. That is especially problematic for the elderly since most people get about half of their daily water requirement from solid foods, fruits and vegetables.

We at Sunshine believe it’s extremely important for our residents to stay hydrated, especially in the warm summer months ahead. So, to encourage them to drink more water and juices throughout the day, we gave all of them a shiny new 16-ounce stainless steel travel mug for Mother’s Day and Father’s Day.

“I drink a lot of water,” said Garl Neel, a resident of Country Club Village in Hot Springs, Arkansas. “It’s good for your immune system and flushes you out.”

Not surprisingly, elderly adults are the most at-risk for dehydration. In fact, it is one of the most frequent causes of hospitalization after age 65 and brings several potentially serious consequences. The most common signs and symptoms in the early stages of dehydration include:

If you know a senior who exhibits any of these symptoms persistently for two to three days, have them see a doctor immediately. Frequent or chronic dehydration may cause even more serious complications, including:

Obviously, the way to prevent dehydration in elderly adults is to make sure they are drinking enough liquid, and the right kinds of liquid. You’ve probably heard it said that all adults, including seniors, should drink at least eight glasses (64 ounces) of water a day, which is a lot, considering caffeinated beverages and alcohol don’t count. (Both cause frequent urination, which actually promotes dehydration.)

The good thing is, water can also be found in many fruits and vegetables, which is why Sunshine menus throughout the day frequently include fruits like melons, berries, apples, oranges and peaches and vegetables such as lettuce, tomatoes, cucumbers, celery and cauliflower. We also sweeten the liquid intake by frequently offering popsicles, milk shakes and smoothies.

They say you can lead a horse to water, but you can’t make him drink. Well, now that Sunshine residents have their own special mugs, everyone is clinking and drinking to each other’s health.