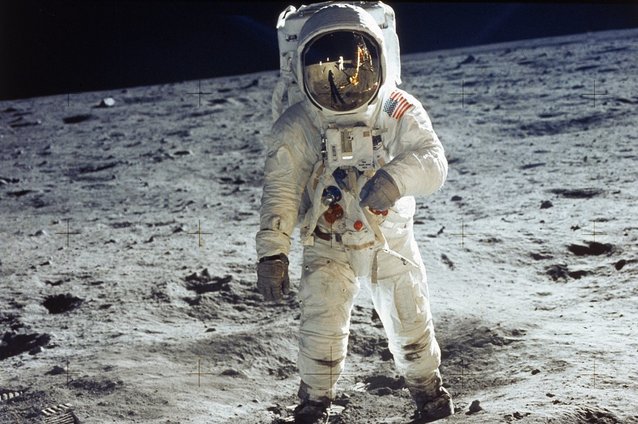 Have you been enjoying the full moon this week? It’s as if the big white orb in the sky is saying, “Hey Earth, what’s going on? You haven’t visited for a while. Why not come up and see me sometime?”

Or maybe it’s just trying to shine its brightest in time for the event that the entire country has been “abuzz” about all month. In case you’ve been on another planet the past few weeks, we’re talking about the 50th anniversary of the voyage of Apollo 11, which sent astronauts Neil Armstrong, Edwin “Buzz” Aldrin and Michael Collins on America’s first truly close encounter with the moon back in July of 1969.

Five decades later, countless Sunshine residents can remember exactly where they were when Armstrong and Aldrin made history by becoming the first human beings to moonwalk, long before Michael Jackson figured how to do it. Many Sunshine communities are commemorating the anniversary of the event with out-of-this-world celebrations. But before we peruse some of the festivities, let’s explore some important (and not-so-important) facts about the event.

Numerous Sunshine residents have vivid memories of witnessing the event and being inspired by the lunar mission. Here are a few of our favorites.

“I was in Junior High and we were in the auditorium watching it on a black & white TV. We heard Neil Armstrong say, ‘One small step for man, one giant leap for mankind.”

“I was traveling and had stopped to visit with a former co-worker in Cheyenne, Wyoming. When Chet Huntley and David Brinkley covered the news on television, you could hear people actually cheering – the sounds reverberated throughout the town.”

“I worked in a Las Vegas casino at the time. When I got to work I went to the break room to watch TV before I was due on my shift. The moonwalk was just ready to begin and I couldn’t tear myself away, so I stayed and watched through the whole thing. I always loved astronomy and was so excited about the concept of humans reaching another planet. When it was over, I went upstairs expecting to be fired. But when the boss asked me where I was, and I told him I couldn’t miss the moonwalk, he just said, ‘Okay.’”

Robert Peckham of The Clairmont in Austin, Texas:

“1969 was memorable because I was a shift supervisor at the Mars Tracking Station in Goldstone, California when they landed. All of the pictures and video from the moon came through our antenna. I am very proud to have been a part of that spectacular day. The space race during the ‘60s in terms of staying ahead of the Russians and coming together as a county at the end of a very turbulent decade was very important to the prestige of the U.S. among the nations of the world.”

“It meant a lot to me because if it wasn’t a success, I wasn’t a success. I worked with the Apollo Space program for six years between October 1965 to August 1971…I remember the uncrewed testings for the Apollo rockets, and how the ship weighed 6 1/2 million pounds. I won a certificate for my service on the Apollo 11 and a pendant. Landing first meant we could learn so much and be ahead of the technological curve. It would help with discovering new inventions.”

Both Bob Peckham and Ray Luttrel will be giving presentations to their fellow residents at their respective communities. And Ashley Hurd, Life Enhancement Director (LED) at Dunwoody Pines will add to the experience by helping the residents make Moon Rocks.

Dunwoody Pines and several other communities will be showing the movie “Apollo 11.” The Verandah in Lake Charles, Louisiana has been having lunar activities all week, including a slide show adventure through the Solar System, a discussion on the phases of the moon, a freeze-dried ice cream social and a “Fly Me to the Moon” Party. And of course, The Clairmont in Austin has gotten into the act as well.

“We’ve compiled a commemorative document highlighting memories from several residents,” said Tina Bertelle, LED at The Clairmont. “We will also have a special ‘Space Snactivity’with Silverado Hospice bringing astronaut dehydrated space snacks that the residents will try to identify.”

After all the fun and games and education, where do we go from here? Not surprisingly, the vast majority of Sunshine residents hope that the U.S. pushed forward with its space exploration.

“NASA was a huge accomplishment for everyone and I would like to see them continue their mission to explore outer space,” noted James Mitchum, a resident at The Clairmont. “I believe we will find life or create a community on Mars someday.”

But why stop there?

Count us in for the 50th anniversary of that event!

This blog was first published here: Sunshine Retirement Living,July, 2019. Some content was provided by Parade.com/Apollo.