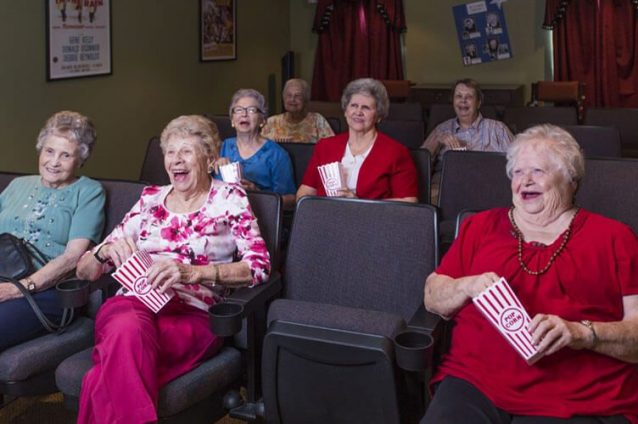 Here in the so-called “dead of winter,” as many of us settle in to watch athletes from around the world gather to compete under the Olympic flag in Pyeongchang, South Korea, it’s natural to feel a little tinge of cabin fever or wanderlust for exotic far-off locations.

Of course, with most of the Northern Hemisphere in the grips of cold temperatures, now may not be the best time to travel. Yet residents at one of Sunshine’s communities have found a way to indulge their travel itch virtually without leaving the building.

Julie Groom, Life Enrichment Director at Creekside Pines in Dallas, Georgia, calls it their Armchair Travel program. In 2017, she led a group of 15-20 intrepid residents on vicarious explorations of the Seven Wonders of the United States, including Mt. Rushmore, The Empire State Building and Hoover Dam. This year, Julie is taking them off to all seven continents with an “edutaining” program she calls Holidays Around the World.

They began their journey in January by studying the history and culture of Australia and sampling its unique cuisine.

“We started the day with morning tea and Vegemite on toast, which, shall we say, is an acquired taste,” said Julie. “We also got to sample Australian favorites like Lamb Patties, Meat Pies, Cumin Potatoes, Honey Carrots and the ever-popular Shrimp on the Barbie with Foster’s Beer and Australian Wine.”

Mostly via slide shows and videos, the group that comes regularly travelled throughout the land down under, explored the Aborigine people, and even played a little Aussie Bingo. The tour culminated with the celebration of Australia Day on January 25th.

Creekside Pines Resident Eleanor Glore enjoyed the entire month-long celebration particularly because she was able to share her own experience of actually visiting Australia and learning not only about the Aborigines, but the first white settlers from England.

This month, Julie’s group is celebrating the Chinese New Year and the Winter Olympics with an armchair trip to Asia. Among the highlights of the journey will be a slide show and talk about China by a guest speaker who teaches there, a performance by the Chinese Atlanta Dance Company, and a sushi-making demonstration and tasting.

The group will also have their own mini version of the Winter Olympics, complete with opening and closing ceremonies, and gold, silver and bronze medals.

The world tour will continue with vicarious visits to Ireland in March, Africa in April, Antarctica in May, and South America in June. And what better place to wrap up the grand excursion than back in the good ol’ U.S. of A. in July, just in time for Independence Day?

“Armchair Travel is a fantastic way for residents to feel like they’re visiting different parts of the world without having to pack their bags and pay a fortune for airfare and accommodations,” says Julie. “And let’s face it. When are any of us going to be able to spend the better part of an entire month in Antarctica?”