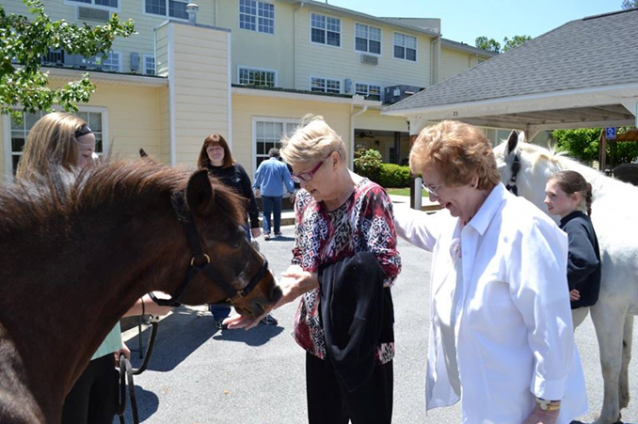 Don’t look now, but the lusty month of May is busting out of the gate with two incredibly exciting, yet radically different events on its first weekend. On Saturday, May 4, a handful of Sunshine communities will be treated to A Day at the Races, as they celebrate the 145thAnnual Kentucky Derby from Churchill Downs in Louisville. And on Sunday, or in some cases, as early as today, several more communities will get their fiestas on with Cinco de Mayo celebrations.

As most everyone knows, the “Run for the Roses” kicks off the Triple Crown of Thoroughbred racing. And with favorite Omaha Beach having to scratch due to illness, the race between 20 other horses is wide open this year.

“Derby day is so exciting,” says Stephanie Hendrix, Executive Director at Creekside Pines in Dallas, Georgia. “What another sporting event has so much emphasis on the build-up with the hat contests, Mint Juleps, and everything, just to end with a race that lasts around two minutes.”

Also known as “The Greatest Two Minutes in Sports,” the Derby is just as much spectacle and ceremony as anything else, with ladies expected to show off their finest hats and springy dresses, while gentlemen outfit themselves in their dandiest suits and blazers; all to fulfill Colonel Meriwether Lewis Clark, Jr.’s vision of making it the classiest race this side of Europe.

“Stephanie and George Kahl, our Director of Maintenance, are both big into this event so they like to be present and help out,” says Creekside Pines Life Enrichment Director (LED) Brandi Limbaugh.“Stephanie puts up print outs of all the horses outside our theater, so the residents can choose which ones they like before the race and George makes Mint Juleps (the real deal). We’ll have some pretzels and light refreshments to go with them.”

Some years the crew at Creekside Pines has had a local horse farm bring over ponies for the residents to pet, learn about and take pictures.

“The race never disappoints,” claims Stephanie. “The residents that come to watch get really creative with their hats and all cheer for their favorite horses.”

Likewise, at The Verandah in Lake Charles, Louisiana, residents are also way into the Derby.
Says LED Becky Dent: 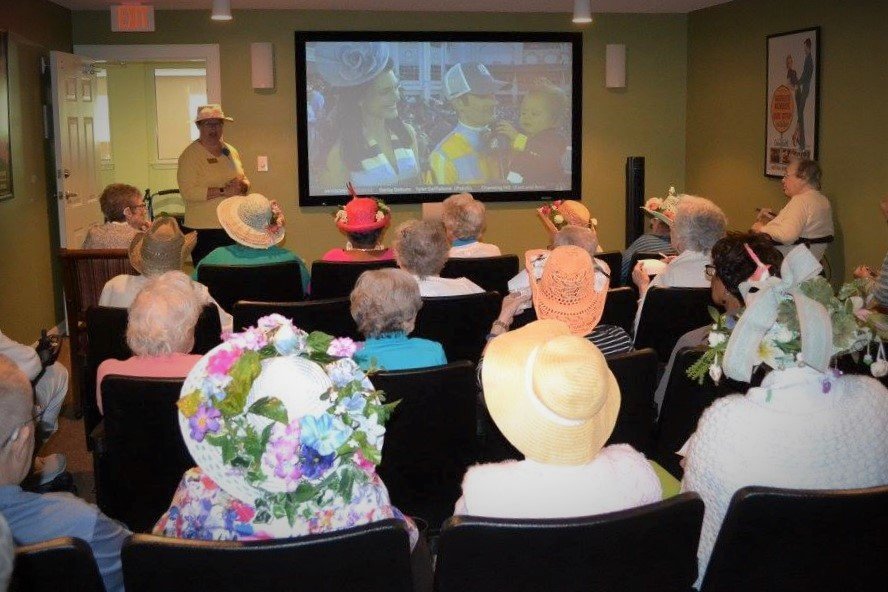 “We have a contest on for the best Kentucky Derby attire. I’m decorating up the Tavern and we will be serving Mint Juleps, cucumber sandwiches, pimento spread, and sweet tea.” While quite different, the culture and traditions of Cinco de Mayo are no less important. In fact, Olga Rosalez, LED at The Continental in Austin, Texas extends their celebration of Cinco de Mayo throughout the week. The menu includes Chicken and Beef Fajitas, Rice& Beans, Chips &Salsa, Tres leches cake and Margaritas.

“Since it has become more popular in the U.S., I share the history of the celebration,” says Olga. “Residents enjoy the foods, music, singing and dancing, the overall camaraderie. Mariachi del Alamo parades around the dining room, which everyone loves. After lunch, we play Mexican Loteria (Bingo). It’s a great fiesta!

“Celebrating Cinco de Mayo on Friday the 3rd made sense with this month’s calendar, as Happy Hour is held each Friday anyway,” said Cindy. “In addition to our regular beverages (beer, wine, and wine coolers) we’ll be serving chips &Salsa and listening to a playlist of traditional mariachi music. I’ve also incorporated a great supply of Cinco de Mayo decorations.”

Similarly, Brenda Olivarez, LED at Garden Way in Eugene, Oregon draws on her Hispanic heritage to provide an authentic experience for her residents.

“We are actually doing a social hour for the main part with ‘Mock-a-ritas,’” says Brenda. “Chef Martin will be having a yummy Mexican-based meal, along with Churros andChips & Salsa.”

Whether you choose to celebrate the weekend sipping a Mint Julep or a “Mock-a-rita,” singing along with “My Old Kentucky Home” or “DeColores,” we hope your Mayo starts off in grand style.

*This blog was first published here: Sunshine Retirement Living, May, 2019.