For Kids, School Is Just Starting. For Sunshine Residents, It Never Ends.

For Kids, School Is Just Starting. For Sunshine Residents, It Never Ends. 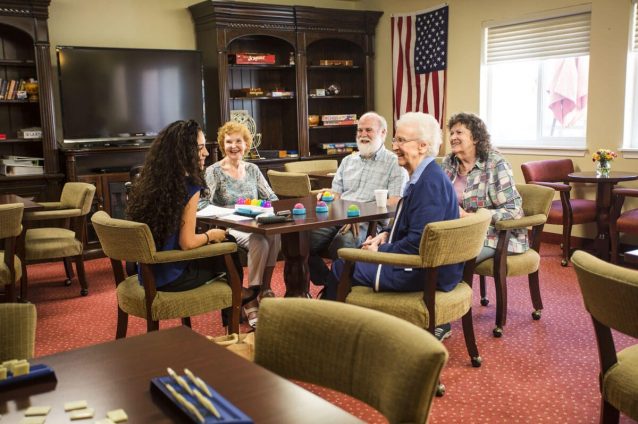 As surely as apples ripen in September and end up in lunch boxes, children across the country are back in school learning the three Rs. But for many residents at Sunshine Retirement communities across the country, the desire to learn new things never takes a recess.

With no family or work obligations to tie them down, our seniors have found that it’s a perfect time to learn a new foreign language or brush up on one that they studied decades ago. For example, at Waterford Terrace near San Diego, resident Aida Flores speaks fluent Spanish and teaches it to a group of residents every week. Since Waterford Terrace is not far from the Mexican border, all of the staff members speak Spanish and are happy to converse with the residents to help them practice. Then, to put what they’ve learned into practice, the group often eats out at a nearby Mexican restaurant, where they can converse even more and understand what they’re eating.

But that’s not all. Waterford Terrace also has a new resident named George Howell, who lived in Japan while he was in the military and was married to a woman who spoke both Japanese and Chinese. When George heard there was a Spanish class for residents, he offered to teach both languages to residents beginning with Chinese. After just a few weeks, he already has more than 10 students.

Meanwhile, other communities are having fun exploring more technological languages, like Facebook, Instagram and Twitter. Julie Groom and Tram Dang, Activity Directors at Creekside Pines in Dallas, Georgia and Villa Serena in Santa Clara, California respectively, have both been hosting classes and workshops designed to help residents learn the finer points of Facebook – how to post messages, photos, comments and reviews – as well as how to use their smartphones and laptops to send emails.

“I like the classes,” said Villa Serena resident Soonok Cook. “It’s really helpful to have somebody show me how to use emails and Facebook. It’s a great way for me to keep in touch with friends and family.”

Villa Serena has also had a volunteer come in once month to help the residents use and fix their phones, laptops, TVs and other technologies.

“It’s wonderful to have tech support available here,” says resident Donna Lusk. “They can show me a lot of stuff I don’t know.”

Creekside Pines residents are also learning new ways to have fun and get some exercise thanks to a Wii Bowling league. The community currently has eight teams that compete twice a week. Resident Herb Carrell has offered to teach a Wii 101 class each week for those interested in playing on a team or just honing their skills. Those classes will hopefully come in handy for the big tournament coming up in November. Creekside Pines residents will test their skills in head-to-head match-ups with their family members.

They say you can’t teach an old dog new tricks. But at Sunshine residents prove time and again, learning new tricks has a way of keeping you young.