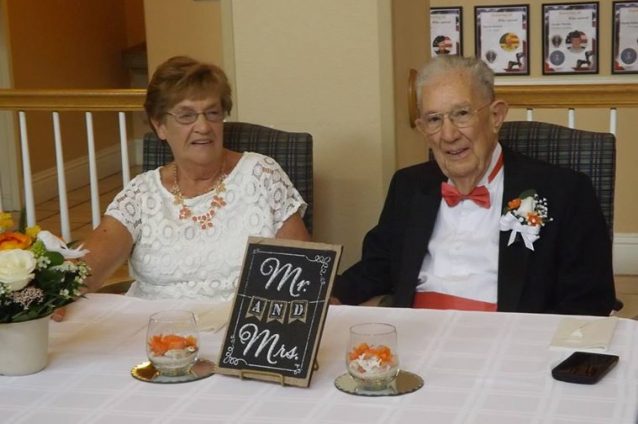 It was an average November day to everyone at Fountain Crest Retirement Community; everyone that is, except Ralph Boettger and Gloria Yuhnke.

You may think of him as bold, or confident, or just a man swept off his feet. But when Ralph passed Gloria on his way out of the Fountain Crest dining room, without warning, he swiftly embraced Gloria and laid a kiss on her unsuspecting lips.

Like a young man in love, Ralph showed that when it comes to matters of the heart, age is nothing but a number. Gloria carried him away at first sight, and when that one unexpected kiss—“a good one,” according to Gloria—hit her lips, they both knew something exciting was about to happen.

Love in the Elder Years

“[I just knew] she was the one. That’s why I kissed her!” reminisces Ralph. And, with that, Ralph wasted no further time. Before Gloria could even wipe the shock from her face, Ralph answered his kiss with an even more shocking move: by asking her to marry him!

But the real proposal comes later. Ralph and Gloria began to spend time together, going for walks and talking on the second story lanai at Fountain Crest, where no one could find them on their “secret rendezvous.”

“I felt like a teenager again,” Ralph says, recounting their first moments together.

“We sat and talked and realized we had so many things in common,” says Gloria. “We thought the same way and felt the same way. As time went on, we looked forward to our ‘meetings,’ where we could just talk to each other.”

Soon, Ralph and Gloria made their relationship official.

Ralph chuckles, “I remember when we started holding hands. We were swinging them back and forth feeling like two teenagers. Gloria wondered if the others were watching us, but I said they were too busy playing cards to pay attention to us.”

A few more kisses, a Valentine’s Day, and a couple months later, Gloria accepted a real proposal from Ralph. They were married on July 24, 2015 at the place of their first kiss, Fountain Crest Retirement Community.

Love in the Early Years

Both Ralph and Gloria were married in their youth, Gloria for 60 years and Ralph for 61.

After so many marital years, both Ralph and Gloria agree, the qualities they look for in a partner were the same then as they are now. Among those qualities, having a lot in common, caring about one another, and a mutual commitment to one another.

Ralph and Gloria treasured these qualities in their prior relationships, and if they had it to do all over again, they wouldn’t do it much different. Probably because they got it right the first—and second—time!

“You can’t tell a 20-year-old anything, because they won’t listen,” says Ralph. “But if I could give advice to a young man, I would tell them to make sure it’s the right one. When you find love, it’s important that you love the other person, but it’s just as important that they love you too. If you perceive that it wouldn’t matter to this girl who you were, or if you don’t really feel she loves you, go for someone else.”

Ralph made the right choice and so did Gloria.

Giving a lot of credit to their prior marriages for their happiness together today, Gloria recalls the key to staying committed is, “just doing what we were supposed to do.”

“First there we were in love, and then we were busy with kids,” she says. “But we were always committed to the marriage.”

When asked what they would think of each other if they had met earlier in life, both Ralph and Gloria said they believe they would have been fond of each other, but they both agree:

“We each lived a full life before we got married. This is just the frosting on the cake—something extra that we’re enjoying. We respect each other’s journey through life, but this is ours together.”

Perhaps part of that enjoyment comes from understanding what’s important to both of them in a relationship: caring for one another, loving one another, and a closeness that comes from choosing someone who is just right for you.

“When the other person loves you, there is a greater feeling of love together,” says Ralph. “That’s always been important to me.”

After 61 years of marriage, Ralph had a pretty good idea of the right kind of woman for him, and she happened to cross his path in the dining room that one November.

They spend their married days together singing in their group the “Humdingers,” talking, and heating up leftovers together in the quiet of their room.

“Yes, togetherness,” Ralph agrees. And he ends his sentence with a devilish chuckle that could come only from a man who would kiss a woman he just laid eyes on for the first time.