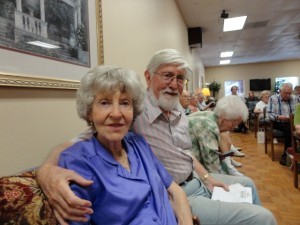 Mike Millwood was born in London, England within the sound of Bow Bells-making him a true cockney. He survived the German bombing of that city, and after World War II ended, he attended a 400 year old grammar school. He won a State Scholarship to study at London University and received an Honors Degree in International History. He then enrolled at Nottingham University for post-graduate studies and then began a teaching profession. Mike taught at several high schools, eventually becoming head of the history faculty. He also received a Master's Degree from Leicester University. In 1965, he became a Senior Lecturer at Kesteven College, a part of Nottingham University. This is where he met his wife, Lyn. Shortly after their marriage, he accepted a post to be the first Principal of the Menai Centre, a residential education facility in North Wales and a center for Open University. After 15 years in this post, Mike accepted a part time post as a Principal Examiner in History with the Cambridge University Local Examinations Syndicate. Mike was awarded a residential Fellowship at Liverpool University during a sabbatical year in 1985 and in 1992 gained a Travelling Scholarship to study in Japan awarded by the Daiwa Anglo-Japanese Foundation.

In 1997, Mike and Lyn made the decision to immigrate to Arkansas (Legally!!) and in 2003 both became U.S. Citizens. Mike taught part-time at a local Community College and as a lecturer in history for a Cruise Ship Line 4 times a year. Mike was selected to be a Visiting Scholar at the University of Southern California in the summer of 2002 by the National Endowment for the Humanities Bursary.

By 2011, Lyn and Mike were anxious to take the worry and responsibility out of home ownership. They visited several independent living facilities in the Hot Springs area and they ultimately decided Country Club Village fit their requirements and needs perfectly. Their cottage is roomy with good views. The buffet style menu suites their preferences. They have been able to indulge in their dancing hobby by organizing and leading a line dance group that has been meeting twice a week for the past two years. Mike is able to give short courses for the local Community College at Country Club Village (CCV) twice a year and occasionally, he can be convinced to give a lecture to the residents of CCV on various subjects of interest. When Mike and Lyn visit their son in Georgia, they always stay at Dunwoody Pines-a sister Sunshine Property.

The other residents of CCV have been glad to have Mike and Lyn join the CCV Family. Their witty banter and colorful anecdotes make for interesting conversations. Their willingness to teach others to dance enriches the lives of others and their fabulous moves on the dance floor provide hours of entertainment and enjoyment to watch. Mike has become a pillar in the CCV community and we can’t wait for you to meet him!