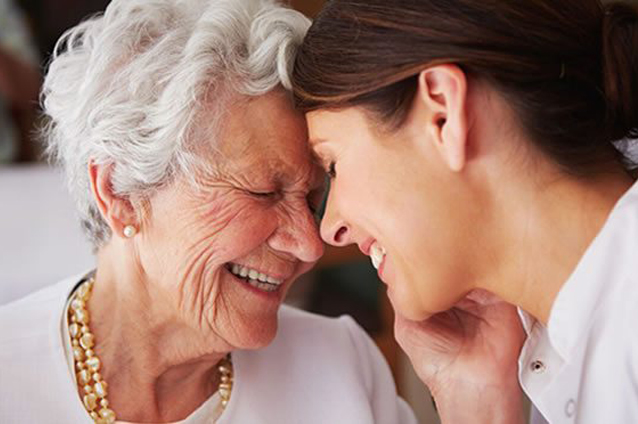 No matter how hectic life gets to be, everyone knows it’s always a good idea to stop and smell the roses. Well, if you follow that advice this week at any community of Sunshine Retirement Living, you’ll be doing a lot more stopping than going.

Not only will all of our communities be tempting the nostrils with a plethora of fresh and fragrant bouquets in our common areas in time for Mother’s Day, countless other bouquets will be brought in by sons, daughters, grandchildren and great grandchildren, not to mention almost every flower delivery service in town. In fact, it’s pretty funny to see the sideways glances when someone brings in a ridiculously large arrangement versus a handful of blossoms that could’ve just been picked from the flower bed next to the parking lot.

What’s more, you can just imagine the colors and smells in the room of someone like centenarian Mary Podgurski at Fountain Crest near Fort Myers, Florida. At 102 years young, Mary has five children, 14 grandchildren, 31 great-grandchildren and 10-1/2 great-great-grandchildren. And counting.

When Mary lived in New Jersey, Sunday was always a big day for family get-togethers with dinner. These days, she always gets a Mother’s Day visit from her daughter who lives in Florida. Most of the others send flowers and visit her via Facetime. In her spare time, Mary likes to knit Christmas stockings for everyone in the family. Needless to say, she doesn’t get much done on Mother’s Day.

A Second Chance at Love, Revisited

But that’s just a hint of what makes Mother’s Day so special at Fountain Crest. Remember Ralph Boettger, the affable resident whose story of finding love late in life was highlighted on this page back in February? Ralph fell in love at first sight with Gloria Yuhnke, a widow who was visiting Fountain Crest from Buffalo, NY and boldly introduced himself with a kiss on her lips. While understandably taken aback at first, Gloria was ultimately captivated by Ralph’s charms and romantic serenades, and she accepted his proposal of marriage before returning to Buffalo and moving permanently to Fountain Crest shortly thereafter.

It turns out the couple’s serendipitous meeting was at least partially brought about by Gloria’s daughter, Debbie Whiteaker, Fountain Crest’s Activity Director.

“I invited Mom [Gloria] down from Buffalo to escape from the cold winter,” says Debbie. “I had no intention of hooking her up with Ralph or anyone else for that matter. But fate took over from there.”

Today, Debbie, who is a mother of four and grandmother of eight herself, couldn’t be happier to have the daring and debonair Mr. Boettger as her father-in-law.

“He’s very kind and thoughtful, a real gentleman,” she claims. “He’s much more outgoing and affectionate than my father, who didn’t get to have a big wedding with my mother because of the war. They had a wonderful marriage of more than 60 years. But it was really nice for Mom to find love again and have a big beautiful wedding this time around.”

In fact, Debbie personally made sure the wedding was memorable by arranging it at, you guessed it, Fountain Crest. Not only did she plan a bachelorette party for her mother, she got to serve as her Maid of Honor. Her husband gave the bride away.

So far, it’s been the only wedding held at Fountain Crest, but may not be the last. Under Debbie’s supervision, the place definitely knows how to put on a special event.

Case in point, one of the Mother’s Day traditions at Fountain Crest is the community’s annual Fashion Show held this year on Wednesday, May 10. Debbie coordinates with Anthony’s Ladies Apparel, a local clothing store, to allow about a dozen residents to model several dresses in a lavish setup at Fountain Crest. The ladies show off the merchandise in front of admiring friends and visiting family members, while an emcee from Anthony’s describes the dresses and Ralph sings popular “mother-themed” tunes accompanied by a pianist. Not surprisingly, many of the women end up adding the dresses to their wardrobes.

A Mother Lode of Celebrations

Celebrations of mothers and Mother’s Day will be happening in one form or another throughout the weekend at all Sunshine communities. For example, the Landing at Behrman Place in New Orleans serves a Louisiana-style brunch on Saturday, featuring Boiled Crawfish, Crab, Shrimp, Smoked Sausage and BBQ Chicken. And many communities will have a special High Tea, where the ladies will show off their finest and fanciest hats.

This year, all women – even those who never had children – will be receiving visors as a gift for Mother’s Day to protect them from the sun all summer long. Many of the communities will add on to those gifts with poems, cards signed by the staff, and sometimes fresh flowers to make them more personal.

Obviously, we love celebrating Mother’s Day at Sunshine Retirement Living. We love all the flowers, the gifts, the hats, the visits from appreciative family members. But most of all, like Debby Whiteacre, we love being able to give back to all the mothers who have loved so much.