On Veteran’s Day, Every Sunshine Community Could Be Considered “The Home Of The Brave”

On Veteran’s Day, Every Sunshine Community Could Be Considered “The Home Of The Brave” 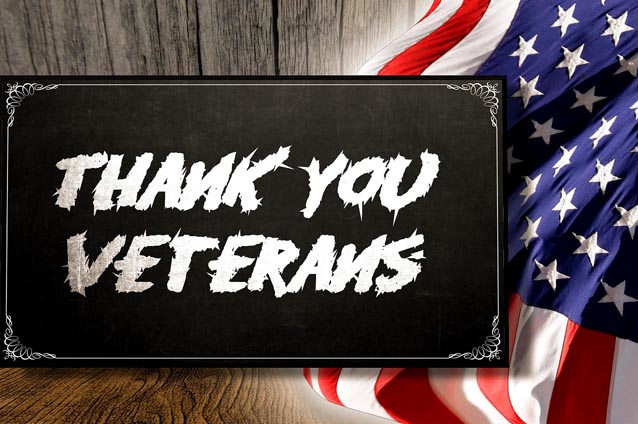 Ever notice how fans at sporting events always let out a rousing cheer at the end of the “The Star-Spangled Banner”? One obvious reason for doing that would be to acknowledge the singer or performers who just delivered the rousing rendition of what is actually an extremely challenging song. Another reason could be the realization that a much-anticipated and potentially exciting athletic competition is officially about to begin. But perhaps the best reason of all for cheering the end of our National Anthem is for the final stanza of Francis Scott Key’s inspiring poem:

O say, does that star-spangled banner yet wave
O’er the land of the free and the home of the brave?

As our nation prepares to celebrate Veteran’s Day for the 80th time since it became a National Holiday, it’s interesting to ponder just how those phrases have become interlinked. We wouldn’t be the “land of the free” if we weren’t also the “home of the brave.” And being “the home of the brave” would be rather meaningless without something as precious to fight for as freedom.

Veterans and Veteran’s Day celebrations can be found at Sunshine Retirement Communities from sea to shining sea. Let’s explore what some of them have going on and what their veterans think of the holiday.

The Verandah, in Lake Charles, Louisiana gets things started a little early with the Verandah Entertainers putting on a Veteran's Day Show on Saturday, November 10. Life Enhancement Director (LED) asked one of her residents, Vic Miesel, a Sergeant in the Navy Service Squadron what makes him proud to be a veteran and why it’s important to recognize them every November.

“I was so proud to serve my country," said Vic. “It was the most critical thing in the world. We fought to ensure freedom."

“We always open with a flag ceremony followed by prayer,” she says. “Every year I make Veteran books for all new residents and a bouquet of cookies in a coffee cup. Plus, I added live entertainment dedicated to veterans in the afternoon recently, because my residents LOVE music.”

This year’s performer, Timothy Patrick, does a humorous multimedia program called, "Legends" that features pop and country songs, stories, jokes and sing-a-longs with some projected images throughout and a special Veterans day tribute to the residents in the audience.

“A lot of residents like to look at the Veteran books and see where others were stationed,” says Brenda. One of them, Leonard Clearwater, served as a Sergeant in US National Guard Infantry in Fort Lewis, Washington, as well as in Australia and New Guinea.

“I spent two years of my life protecting America from the Japanese,” said Leonard. “A lot of gave their lives and time to keep us safe. The men and women have sacrificed a lot.”

Bob Johnson, an Army Specialist 3rd Class in Korea, says he’s proud “to be one of the ones that was willing to fight in an allied country to protect their rights, freedom and there way of life. It’s important to let the new generation know why and what we fought for: The right to govern ourselves.”

At The Landing at Behrman Place in New Orleans, LED Stacy Harrison says the veterans in her community served their country with honor and respect. So she will honor them this year with a live performance by Tony Castle, who often performs at the World War II Museum.

According to veteran Robert Williams, “It's important to recognize and honor all men and women who have fought in combat for this country since World War I. It’s an honor and a blessing to show this young generation today that if we stand together as a country, we can achieve anything.“

At Dunwoody Pines in Dunwoody, Georgia, LED Ashley Hurd says they are having an honor Brunch for Veteran's and their wives.

“We have honoree pins and certificates for each resident,” she says. “I have hired a DJ who is a Veteran himself and will give a speech. I will announce each Veteran by name and information about their service. The DJ will play music from each branch of service. Finally, I will take individual pictures and a new group picture that I will get blown up to be part of an updated Veteran's Wall.”

Dunwoody Pines Resident Bill Robinson, who served in the Air Force from 1946-1949, shared his opinion:

"It is important to recognize veterans in this day and age because we are the backbone of the country. It took millions of courageous men and women to protect this country and to give us the freedoms we have today."

Like many Sunshine communities, Country Club Village, in Hot Springs, Arkansas will be having their Veteran's Day Celebration on November 12th. According to new LED Cindy Smith, the celebration will include patriotic decorations, readings and music played by local musician Dean Angus. They will be honoring each veteran with a flag star and a poem donated by the Daughters of the 1812.

Reflecting on his 10 years of service in the Air Force, resident Jack Scalph stated, "I served my country and that makes me proud. We should honor our veterans for still being a country after nearly 250 years!"

Joe Lawrence, a veteran of four years in the Air Force agreed. "It makes me proud that I volunteered to represent my country and do what needed to be done,” he said. Veterans appreciate being recognized for their service and they deserve it."

Lieutenant Colonel Dick Smedley, who served in the Army for 25 years added, "It is important to remember veterans because many gave their lives and should not be forgotten."

“One of our hospice providers will be joining us to commemorate our veterans with a pinning ceremony followed by a small reception for family and residents with cake,” she says. “It is always a lovely day.”

Windsor Heights resident Dave Eitman, who served in the Army for six years as a Captain in Frankfurt, Germany, says his military service makes him think of President John F. Kennedy's famous words, "Ask not what your country can do for you, but what you can do for your country."

As he says, it’s truly a good concept to pass on to others regardless of whether they serve in the military or perform other acts of service for their country. We deeply appreciate the years of service given by our veterans, both male and female, and treasure having them as residents.