St. Patrick’s Day Brings Food, Fun and More Than a Pinch of Blarney

St. Patrick’s Day Brings Food, Fun and More Than a Pinch of Blarney 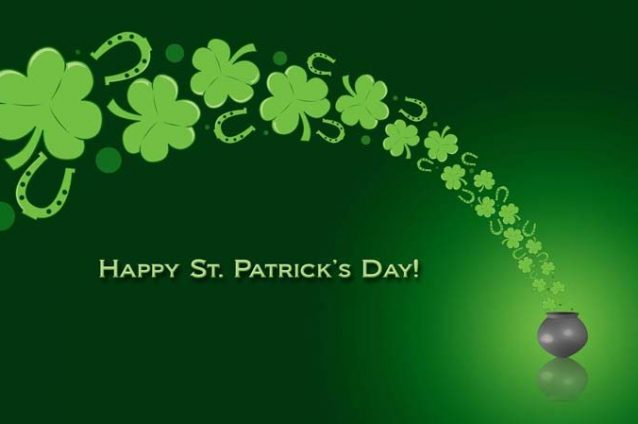 If it’s true that March comes in like a lion and goes out like a lamb, then St. Patrick’s Day marches in like a crazy combination of the two, a creature equal parts wild and mild; grand and unpredictable, yet grounded in religion and tradition. Even if you don’t have a trace of Irish in your blood, it’s easy to get caught up in the wearin’ of the green, the pinching of those don’t, and a chance to find a pot of gold at the end of the rainbow.

Sunshine Retirement Living communities across the country enjoy celebrating the festive day in various ways. All will be serving specially prepared Irish menus for lunch and dinner. Some, like Chef Doug at Creekside Oaks in California, will go all out with corned beef & cabbage, steamed carrots, Yukon boiled potatoes and Irish soda bread. Then he’ll top everything off with shamrock cupcakes for dessert. Yum!

Other communities, such as Dunwoody Pines and Villa Serena, are rallying the residents with more “saintly” activities, like selling shamrocks to raise money for local homeless families and shelters.

According to Irish legend, Saint Patrick used the three-leafed plant as a metaphor for the Holy Trinity when he was first introducing Christianity to Ireland. But did you know the shamrock is not the national symbol of Ireland? Nope. It’s the harp. And there’s actually no corn in corned beef. The “corn” refers to the large grains of salt known as “corns” that were historically used to cure meats.

As you might expect with a country known for its blarney stones, those aren’t the only misperceptions associated with Ireland’s popular national holiday. For example, Saint Patrick was not even Irish, nor was he named Patrick. He was born “Maewyn Succat” to Roman parents in Scotland or Wales in the late fourth century. He changed his name to Patricius after escaping from slavery and becoming a priest in Ireland. And unlike most of our holidays and celebrations that commemorate the birth of a noteworthy person, March 17th is the holy day of Saint Patrick’s death and subsequent entrance to heaven in 461 AD.

If Saint Patrick were around today, he might’ve got pinched quite a bit. His color was “Saint Patrick’s blue,” a light shade that looked nothing like green. The color green didn’t become associated with the big day until it was linked to the Irish independence movement in the late 18th century. And no, Saint Pat did not banish the snakes from the island. The fact is, the country was too miserably cold to have the cold-blooded reptiles in the first place. But to his credit, the banished snakes were thought to be symbolic of the pagan druid priests whom Patrick either cast out or converted to Christianity.

Where it Rains, it Pours.

St. Patrick’s Day is obviously a big deal in Ireland, and has been since 1903. But for most of the 20th century, it was strictly a religious holiday, which meant the pubs were closed and you couldn’t buy a green beer, or any kind of alcohol for that matter. The one notable exception was at the traditional St. Patrick’s Day national dog show where beer vendors were allowed to pour. The government finally came to its senses (or lost them) in 1970 and converted the day to a national holiday, so the stout could flow. It’s said that attendance at the dog show dropped dramatically that year.

As big as it is in Ireland, it’s no secret that St. Patrick’s Day is much, much bigger in the U.S. Thanks to the potato famine and almost constant emigration over the past two centuries, there are an estimated 34 million Americans with Irish ancestry, compared to only 4.2 million Irish living in Ireland.

And we’ve been celebrating the day much, much longer too. Irish-Americans have been parading up New York City’s Fifth Avenue since 1762, often with more than 250,000 people traipsing the route. (The parade still doesn’t allow floats, cars or other modern trappings.)

Not to be outdone, Chicago has been honoring Saint Patrick by dumping 40 tons of green dye into the Chicago River since 1962. And even small towns like Hot Springs, Arkansas get into the act. They host the world’s briefest St. Patrick’s Day parade at a staggering 98 feet. (Or about as far as the average reveler can go between sips.)

We’ll Drink to That.

Just how much drinking goes on these days? Well, the global corporate relations manager for Guinness says that they typically sell 5.5 million pints on an average day. But he claims that number jumps to a remarkable 13 million pints on St. Patrick’s Day. And as a whole, it’s estimated that St. Patrick’s Day alone puts about $250 million into the pockets of brewers, which suggests that March 18 should ultimately become International Hangover Day.

Now that you’ve had your fill of St. Patrick’s Day blarney, put on your green and join your fellow residents for a rousing March 17 celebration. We’re sure your Irish eyes will be smiling.