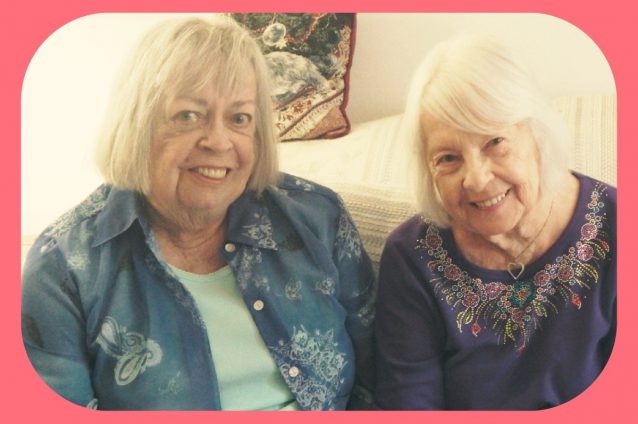 “‘Thank you’ is never out of style.”  Wise words from mother to daughter.

The celebration of Mother’s Day in the United States dates back to the early 20th Century. It was in 1914 when Woodrow Wilson signed the proclamation creating Mother’s Day the second Sunday in May, officially creating this national holiday to honor mothers.

Our wise mother quoted above is Peg Coburn, a Sunshine resident of Summerfield Estates in Tigard, OR, who will celebrate her 99th birthday next month. Peg was born in June 1916, just 2 years after Mother’s Day was proclaimed a national holiday.

Peg will be celebrating Mother’s Day this Sunday with friends and family, most importantly her only child, daughter Sharon Bowgren. Like mother, like daughter, Sharon is also a resident of Summerfield Estates! Although they do not share an apartment together, they do enjoy the comforts of knowing the other is down the hall, living in the comforts of a safe and social community.

Peg’s daughter Sharon once worked for the developer of the community of Summerfield, so they always knew about Summerfield Estates Retirement Community. Peg remembers Sharon saying, “Gee, I can’t wait until I’m old enough to live here!” Up until daughter Sharon moved in 3 years ago, she had an apartment in Portland. When she retired, she knew where she wanted to live – Summerfield Estates. Peg and Sharon do see each other more often now that they both live in the same community. Although they have different circles of friends, they eat their meals together in the dining room and spend a lot of quality mother-daughter time together. Peg tries not to “mother” Sharon around too much anymore, although it is sometimes tempting. One thing Sharon has learned from her mother is to be nice and polite. She remembers her mom always telling her, “‘Thank you’ is never out of style,” and “When in doubt, say, ‘Thank you”. Peg is proud of how her daughter turned out, that she is polite, well-mannered, and even-tempered.​

Sunshine thanks Peg for sharing her wise words and her mother-daughter story with us. Wishing all of our amazing mothers & grandmothers a special and wonderful Mother’s Day this Sunday, May 10th.  We’d love to hear your special story and invite you to post photos and stories on our Facebook Page.