The Secret to Lifelong Love from Gerry, 87, and Raymond, 90, Powell

The Secret to Lifelong Love from Gerry, 87, and Raymond, 90, Powell 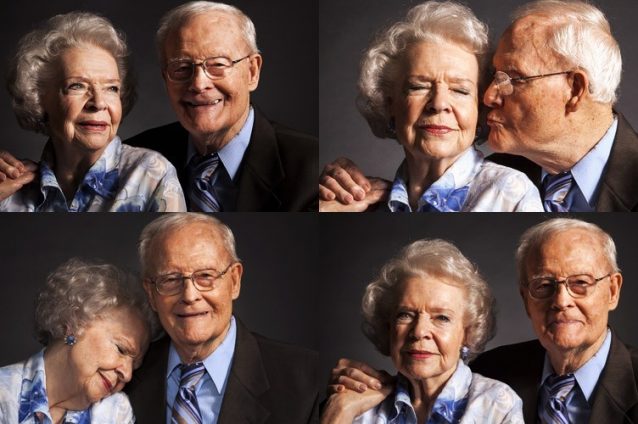 Live at The Continental, Austin

Q: Where did you grow up?

A: Gerry: I grew up in Houston,… and we lived about five houses from each other on the same street, so we had seen each other since childhood, but the rest of the story is to come.

Ray: I probably didn’t pay much attention when we were growing up, but we’ve known each other since we were about 10 years old.

Q: How old were you when you realized you had these feelings for each other?

A: Gerry: I was 13 and Ray was about 16. I had had my eye on him for a long, long time. I mean I noticed him in the neighborhood, but I don’t think he knew I was noticing him. He was the cleanest cut, most polite boy ever. I learned that he noticed me, but I didn’t know it.

Ray: My family was very poor and I had to quit school; I got a job and took care of my mother. We went into the Depression and I took care of Mama. Then, Uncle Sam was breathing down my neck when I turned 18, so I signed up and went.

Gerry: The most remarkable thing — the turning point — was when he sent me a letter while he was in the South Pacific during all the battles along the Asian coast in WWII’s heaviest times. He was there for two years. They were under heavy fire quite a lot, but I received this letter out of the blue and I was just absolutely floored.

Ray: I got overseas and I figured I was thousands of miles from her, so I wrote a letter to Gerry and signed it, “Love, Ray,” for the first time. The man who lived across the street from her was my friend. I sent the letter to him and he gave it to Gerry.  That’s how we got started.

Gerry: So we we started writing every day, and then he came home. We went together for about a year, and then we got married.

Q: Did you still have the letters?

A: Gerry: I don’t; at the time, I didn’t realized how wonderful it would be to have all those letters.

Q: What’s the nicest thing that Ray said in the letters?

A: Gerry: It’s hard to remember, but the tone of those letters was so sweet, I knew that he was the sweetest boy that I had ever known. His manner so sweet and he signed his letters with “Love.” That’s about it. He didn’t tell me a lot, but he meant every word.

Q: What’s the nicest thing Gerry said to you, Ray?

A: Ray: I couldn’t write about the ship, but I thought of enough stuff to put in the letters, and we finally got to where we put “love” at the end of it. They must have said something to her… the nicest thing? “I love you.”

Q: Where did you get married?

A: Ray: In Houston, and that was on March 15, 1947, my birthday, and she finally asked me to marry her. I didn’t think I could afford it, but it was enough. The Lord took care of things.

Gerry: We have been married for married 68 years.

Q: What did you like most about Ray, Gerry?

A: Gerry: He was always the town clown.

Ray: I kept the fun in the family — she was so smart and beautiful and square.

Q: You laugh a lot together, don’t you?

A: Gerry: We have two sons who are both retired; I can’t believe that. The older is 64, and the younger is 61 or so. The older lives in Houston, and the younger is in Austin. He flies a helicopter for Methodist Hospital in San Antonio, commutes every other week to San Antonio and he loves his job. He retired from the Department of Public Safety. He supervised 26 state helicopter pilots. He was he in the service, but before that he had taken lessons to fly a plane.

Our older son was a state trooper, then went to work for Southwestern Bell as an investigator. He retired from AT&T. Now, he is still employed by the Special Deputy US Marshall and works in the civil courts federal building. Both are qualified to carry guns, even into church! Pastors are sometimes threatened, so it was a comfort to the pastor to know he was protected. We are lucky enough to have five grandchildren and five great grandchildren.

Q: What is the secret to a long marriage?

A: Gerry: I think it’s being forgiving, having a Christ-centered home, and coming to the aid of the other when needed.  And just reviving the good old days, whenever you can.

Ray: I took care of Gerry for about three years when her mom had a stroke and we had two kids, and I took care of all of them. Then, recently, I fell twice and hit my head, and had a subdermal hematoma — I couldn’t talk or remember anything. Gerry was right there at my shoulder. But I’m getting better every day. I’m going be chasing women soon. She does all the billing, I used to do that. I do a lot of the housework. We love each other and I look at her every day and say, you are the most beautiful thing I’ve ever seen.

Gerry: I’ll tell you what — I caution him every so often, if we are in a group, I may have to pat his arm. He’s a handsome man.

Q: Besides each other has there been anyone who had the most influence on you?

A: Gerry: Our children. We are just so proud of them and they look after us.

Ray: when I fell, I was in the hospital for several days, and the boys said, “The doctor wants you out of this house, it’s too much. A place where they will take care of you and your food.” And we are so happy here now. I thank the Lord that they put it in their hands.

Q: Is there a lesson that you have learned over your lifetime that you’d like your grandchildren to know?

A: Gerry: Forgiveness. There are so many people who don’t know how to forgive, and it would please me if I knew my children were forgiving in any event. A little hard to think about forgiving ISIS, for example, and hard to put it in the context, but I can still pray that they will come to some sort of realization and that they will not continue.

Ray: I have taken care of several different woman who were a lot older and I didn’t do it to gain honor, but because the Lord put it in my heart to do it. That, to me is the lesson I’ve learned from my life. To be able to help somebody — cleaning out attics when it’s 115 degrees, for instance. Not bragging, it’s what the Lord has put in my heart.

A: Gerry: Well, I love to read, and I used to do a tatting and I loved it.

Gerry: Ray and I used to make our own greeting cards and we used a little tatting on the cards. We don’t travel, and we don’t play games. Ray has been plagued with that pain, fatigue and that kind of thing. So we don’t participate, but we love being here. We are so happy with the apartment, the food, the management, the transportation, everything. It’s just wonderful. We’ve been here a year in May. And we love the dishwasher and washer dryer.

Ray: I love to fish. I love any clean sport —  softball and hard ball. I was a coach, and it’s been a wonderful life. And we do love it here. It’s nice to have company. Jon and Marie swell people. And the staff is so friendly and so are the residents. It’s the best.

Q: What’s the best thing about getting older?

A: Gerry: I would say seeing our family, our grandchildren and their children; seeing family members and visiting with them.

Ray: I can’t believe I turned 90 years old on March 15, but God has a reason. I went into the Navy and they put me on the wrong ship, then took me off — 6 months later it was sunk and 60% of them were in life rafts. We had two suicide planes come at us, they were coming right at us! And we got them both. We had bombs from the shore shooting at us. Then we fought the Japanese fleet in the South Pacific, we got out just in time. We saw a missile hit the water just where we were sitting. There was something going on all the time.

Q: Were you scared?

A: Ray: I felt scared and brave at the same time — I stayed on my battle station and prayed and went right on through it.

Q: OK, what’s the worst thing about getting older?

A: Ray: Not being able to go fishing.  I know I’m close to being with the Lord, and I hope that he’ll come and take us both together. And I hope I’ll be 35-years-old up there. It’s gonna happen, we just don’t know when.

Gerry: For me the worst is that if I have a new grandbaby, I can’t walk around with him. I’ll just sit down now, but I loved walking around with them. I would love to be able to hold them and walk with them. I miss that. But I am thankful that we see them so much.