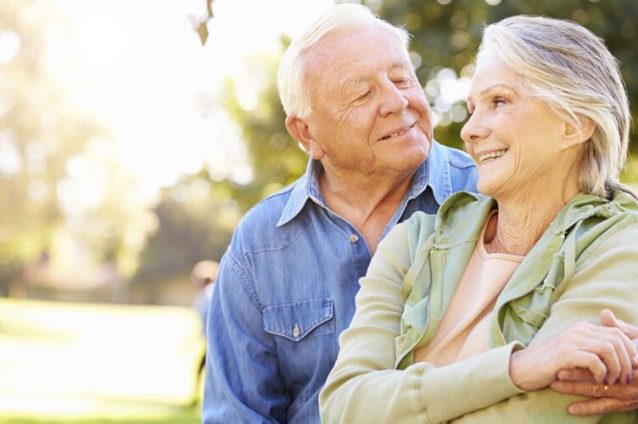 Two weeks ago, we mentioned in our post how many Sunshine Retirement communities celebrated Valentine’s Day this week with special meals and dances. But at one community in particular – The Clairmont in Austin, Texas – the atmosphere of love took on even greater significance. That’s because three couples with nearly 150 years of marriage between them chose to renew their wedding vows.

Vern and Ginger Cox, who have been married 54 years, and Lee and Barbara Doyle, who have been hitched for 33 years, are both celebrating their anniversaries this month. So it was the perfect time to recommit to each other. Bill and Wilma Umaberson, who will reach an amazing 62 years of marriage in April, also joined in.

The Clairmont’s Life Enrichment Director, Tina Bertelle, thought the ceremony would be a nice addition to their usual Valentine’s Day festivities and she served as pastor for the proceedings.

“I wanted to share this event with everyone together as a community to show lasting love stories that go well into the golden years,” said Tina.

The event started with a busload of residents visiting Red Lobster for lunch. Afterward, the group returned to The Clairmont, where every resident was invited to attend the ceremony.

Tina, whose father-in-law was a pastor, read from the scriptures and recited a lovely poem for the occasion. Grammy-nominated singer and pianist Lisa Clark played a variety of classics and love songs for the residents to dance to. She also played individual serenades for each of the couples. To cap things off, the Chef prepared dozens of cheesecake petit fours for the attendees to enjoy. And a daughter of one of the residents filmed the entire event for posterity.

All in all, it was a Valentine’s Day rich with sentiments and memories that will linger long after the roses and candy hearts are gone.