What Will The Clever Little Bunny Leave You On Easter Fool’s Day?

What Will The Clever Little Bunny Leave You On Easter Fool’s Day? 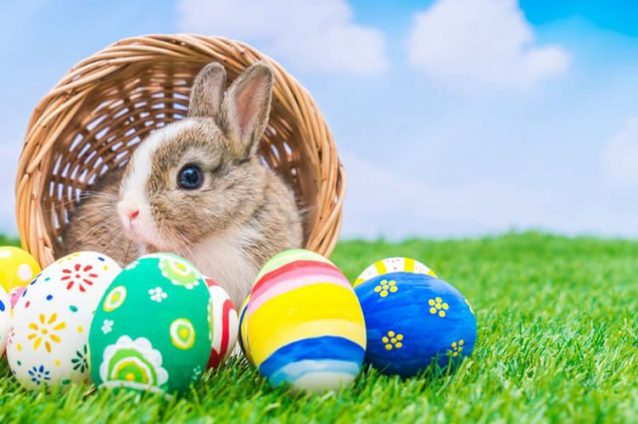 Has this been a strange year so far, or what?

You know how the expression, “once in a blue moon” refers to events that don’t happen very often, like months that have two full months (the second being known as the “blue moon”)? Well, as if to throw a monkey wrench into that idiom, tomorrow night will bring the second full moon of March. Yes, another blue moon in the same year, just two months after the first one.

How often does that happen, you ask? Well, let’s just say less than once in a blue moon. So be prepared to check it out. Because the next blue moon won’t happen until 2020. And the next time we have two blue moons in the same year won’t be until 2037.

Now, another event that revolves around the moon, of course, is Easter, which traditionally takes place on the Sunday following the first full moon of spring. As usual, Sunshine Retirement communities across the country will celebrate the day in style with special brunches, lunches and dinners, religious services and bouquets of fresh-cut flowers virtually everywhere you look.

Many of them will kick off the festivities with other Easter “hoppenings,” including:

But like we said, it’s a strange year. And it just so happens that this Easter Sunday is also April Fool’s Day (April 1) a coincidence that won’t occur again until 2029. So don’t be surprised if the Easter bunny or someone else in your community tries to pull a prank or two.

If you want to beat them to it, here are a few examples of Easter foolishness you might try to pull off on your family and friends.

1. Mystery Eggs. Everybody loves cracking open those colorful plastic eggs to find candy, coins or a special surprise inside. What if those special surprises instead were empty candy wrappers, raw vegetables, pebbles, or fake money? If you want to up the game a little, how about putting an empty small plastic egg inside a larger plastic egg inside a large plastic egg like a nesting doll. To add a little drama to the mystery, put some glue on the eggs so they won’t open easily.

2. Not-so-Hard-Boiled Eggs. Just ask the guests who play “Egg Roulette” with Jimmy Fallon on The Tonight Show. It’s almost impossible to tell if an egg has been hard-boiled or not when you pick it up and have to smash it on your head. So when you bring the eggs out to be dyed and decorated for Easter, swap out a few of the hard-boiled eggs for ones that are still raw. If they don’t accidentally drop one during the decorating, they’ll have a nice surprise when they’re ready to eat it. Make sure you hide a mark on them somewhere so you’ll know which ones are going to be a little runny.

3. Eggs A-peeling. For something a little less messy, buy a bag of small chocolate eggs and a bunch of grapes at the store. Then after washing and drying the grapes, carefully unwrap the colored pieces of foil from the chocolates and wrap them around the grapes. This will give the kids a healthy snack among all of the other sugary treats.

4. Reappearing Eggs. This works great with young kids, but can be effective with adults as well. Tell them to come outside and hunt for eggs before you actually hide them. Then follow them around with a bag of concealed eggs and put them in places where they just looked. Both kids and adults are so intent on hunting in new places they don’t think to cover their tracks again. In fact, after they’ve combed an area, you might be able to leave the eggs in very obvious places. They won’t believe how they could’ve missed them the first time.

5. The Basket Case. If you typically give the grandkids an Easter basket filled with chocolate bunnies, toys and stuffed animals, this year fill it with silly items from a thrift store – golf balls, 8-track tapes, soap, silly string, etc. with an “April Fools” note at the bottom. Then make them go on a hunt for the real Easter basket.

6. Yummy Easter Sponge Cake. It simply wouldn’t be Easter without dessert and a light, airy sponge cake is the perfect spring treat. Of course, the April Fool’s version would be made with, you guessed it, actual sponges. Get a 12-pack of kitchen sponges in pink, green, yellow and purple and a can of white frosting. When you take it out of the fridge and slice a piece or two around the sponges hidden in the frosting, it will look very realistic. To make it even more convincing, make sure everyone sees you baking a real sponge cake the night before and swap it for the spongey sponge cake later.

7. Somebody Done Some Bunny Wrong. This simple trick is for only the most wicked pranksters who aren’t afraid of retribution. Carve a small hole in the bottom of a large chocolate bunny and squirt mustard inside the hollow cavity. Then do your best to plug the hole with chocolate. This is sure to punish the unsuspecting child or person who aggressively bites the head off of the bunny. Better have another chocolate bunny in reserve. And make it a larger one at that.

Of course, these foolish things are all Easter-related. You could be the perpetrator or victim of any number of other April Fools pranks among your family members or around your community. So if you can’t blame it on the sneaky Easter bunny, maybe it’ll be the mischievous Man in the Moon instead.