You can’t blame The Landing at Behrman Place for not having enough candles to put on Mina Kaiser’s birthday cake last week. After all, it’s not every day a resident turns 105. And by the time they could get all of those candles lit, it wouldn’t be her birthday anymore.

Of course, when you get to be Mina’s age, you’re entitled to extend the celebration somewhat, and that’s exactly what she did – celebrating with her nieces and nephews on the 22nd (her actual birthday) and partying with her fellow Sunshine residents the next day – both at The Landing.

That’s right. We said, “nieces and nephews,” not “children and grandchildren.” Although she was married to Russell Kaiser for more than 30 years, the couple never had children. But the children of her beloved sisters, Ruth (Thomann), Violet (Wertheimer), Ethel (Oechsner Howe) and Olga (Foley) treat Mina like their own mother, especially since she’s the last remaining survivor of the siblings. 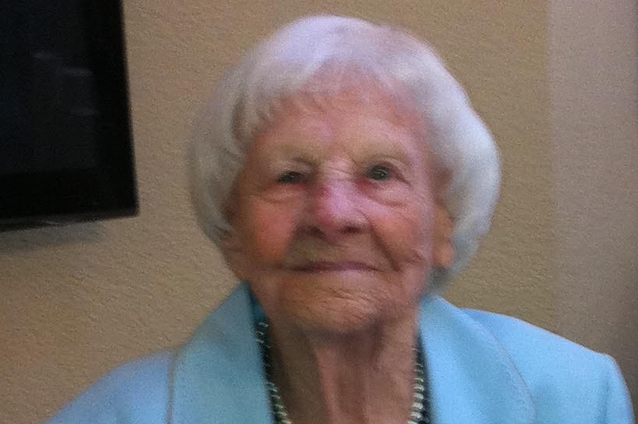 Actually, all of the siblings were survivors in the true sense of the word. Ethel was the oldest of the Oeschner children, born in 1907 and Mina was the youngest of the five girls, born in 1914 – all of them in New Orleans. A younger brother named George was born in 1916. Sadly, their mother died during an influenza epidemic in 1917, but their father kept the family together with the help of his sister and the nuns at the Episcopal Girls Home.

As the girls came of age, they attended the Soule’ Business College in New Orleans, where they each learned a trade. Mina enjoyed sewing and studied to become a seamstress, which paved the way for a 35-year career in the lingerie department at Maison Blanche, a well-known department store on Canal Street. With no children to chase around, Mina stayed in shape walking back and forth to work, and she and her sisters loved to go fishing, crabbing and swimming on nearby Lake Pontchartrain.

The Storm of the Century

Fast forward to 2005: Mina, Violet and Ruth were widows and the last three remaining siblings of the family. They each lived in their own homes in the New Orleans area when Hurricane Katrina came through in August, destroying almost everything they owned. Mina was rescued by boat and evacuated to Florida. Thanks to the Red Cross, she was reunited with her sisters three weeks later. With literally no place to go, Mina and her two sisters found their way to The Landing in February of 2006, where they shared a two-bedroom apartment.

“The Golden Girls,” as they became known, loved living together at The Landing. It’s safe to say the food and activities were far more enjoyable than what they grew up with at the Episcopal Girls Home.

Eventually, Ruth passed away at the ripe age of 100 in 2009 and Violet succumbed just a month before her 100th birthday a couple of years later. Mina, however, just keeps on going with the help of her caregivers Joyce Williams and Sabrina Carney.

“Ms. Mina is a fighter,” says Joyce, who has taken care of Mina for the last five years. “She just takes it one day at a time, eats well and doesn’t take any medicine. She keeps up on things by reading the paper and watching TV.”

“It was great to have so many family members together at The Landing for Aunt Mina’s 105th,” said Christine Landry, Mina’s niece. “She didn’t dance like she did at her 100th birthday. But she loved the pork chop dinner, the Gentilly cake, the flowers, the balloons, and all the attention.”

In honor of her 105th birthday, the New Orleans City Council created a special proclamation for Aunt Mina. But having her at The Landing makes every day special for us.