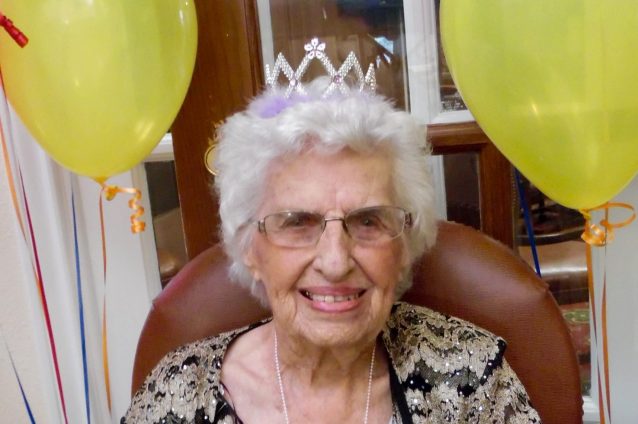 Celebrating 100 Years of Mrs. Dorothy Eppright and 10 Years with The Continental in Austin, TX.

“Live each day to the fullest.”

Dot is the type of woman that you meet once, and you never forget.  She’s a shark at cards, quick-witted, funny, sweet and friendly. She participates in most social activities and exercise classes at The Continental – and sometimes even goes out dancing. As we celebrate Dot’s milestone birthday, her kindness and warm spirit, her family has written up a history on her life so far.

Dorothy (“Dot”) Eppright was born in McKinney, Texas on March 22, 1915. She was raised on the family farm in a small town called Melissa, just outside of Dallas. Dot attended and graduated from Trinity University, which back then was located in Waxahachie.  After graduating from Trinity, Dot moved to San Antonio, where she taught school to bi-lingual students and met the love of her life, future husband, Charles C. (“Charlie”) Eppright, Jr.  They were married in May, 1946, lived in Houston for several years before settling down in Bay City, TX in 1949.  Dot and Charlie had two sons, Charles and David. Charles now lives in Austin with his wife, Patsy, and David lives in Pensacola Beach, Florida with his wife, Scarlett.  After David started school, Dot went back to work at Bay City Federal Savings and Loan, where she worked until retirement.  After retirement, Dot was very active in many civic organizations in Bay City, including the Pilot Club, Friends of the Bay City Library, Antique Doll Club Matagorda County Museum, Bay City Chamber of Commerce, and Book Review Club.  She was a member of the First Baptist Church of Bay City.  Dot loves to travel, and has travelled to Cuba, Mexico, Hawaii, Seattle, San Francisco, Montreal, Boston, London, and Israel, among other places.  She also loves to play bridge, dominos, Bingo, and various other card games.  Charles died in 1986, after 39 lovely years of marriage.  Dot stayed in Bay City until November, 2005, when she moved to Austin to be closer to her family and became part of our family at The Continental.  Dot has two grandchildren, Dr. Brian Eppright, an anesthesiologist in Lubbock, and Megan Matza, a realtor in Austin, and five great-grandchildren, Elizabeth, Hunter, and Will Eppright, and Halliday and Palmer Matza.  If you ask her where she want to go eat, the answer is always the same, “I don’t care so long as it is Mexican food.”

Our Activity Director at The Continental, Olga, has been working at the community as long as Dot has lived here. She took great joy in helping her family plan a wonderful birthday celebration with cake, balloons, lots of friends and family, and of course, a well-earned tiara.

According to Olga, “Everyone loves Dot at The Continental.” After meeting her, you know why.