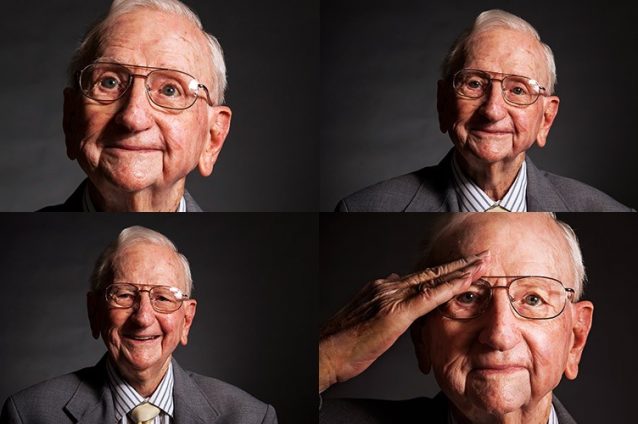 Lives at The Continental Retirement Community in Austin, TX

Q: Where you born and… raised?

A: I was born in Birmingham, Alabama. I spent my childhood there, until I entered the service. Part of my childhood was in the Depression, but no one had anything then, so we were thankful with what we had.

Q: What branch did you serve in?

A: I served in the Navy Sea Bees [CB: Construction Battalion). At first I was working on a highway here in the states, that was a designated military highway, so I had a deferment from the draft. All the other young men were gone, so it looked like I was a draft dodger of some sort. But I was making $78 a month, versus $24, which is what they made. But I wanted my draft card, so I told my mom, when that card comes in, you let me know! Well, it came and my mom called the office and said, “Red, your card is here.” I went straight to the recruiting office and even though they had’t seen the card yet, they swore me in to the Sea Bees.

Q: And where did you get stationed?

A: We went to New Guinea on a transport ship that was an American cruise liner at the time. And I think we had about 10,000 troops including some ladies, aboard. We were carrying steam shovels and bulldozers, too. We got to New Guinea and worked there. Then we boarded a liberty ship and took a convoy up the coast of New Guinea. We ended up running aground a coral reef. The captain tried lining us up on one side to rock it off the reef, but we had to wait for an Australian tugboat to pull us off. It took two or three days! Tugboat then came in flying an Australian flag and they pulled us for 2-3 days, never let up and in time he pulled us loose. We built a 500-bed hospital. When I look back now I realize this was probably in preparation for General MacArthur’s “I shall return” campaign in the South Pacific, which of course didn’t happen.

Q: Did you see very much fighting?

A: I didn’t see a lot of close-up combat but airplanes bombed us and the Japanese we saw were usually just in small groups, either lost or on recon, and they were not hard to capture — I think they were glad.

Q: Did you ever shoot anyone?

A: Well, I have shot my guns, but I don’t know whether I hit anyone or not.

Q: How long did you serve?

A: I came home from WWII and then stayed in the Reserves, and went back to Vietnam in the ’60s.

A: Yes, when I got home from WWII, and we had 2 boys and a girl — my daughter lives in Austin, and my younger son lives in Spicewood. The older is in Oklahoma.

Q: Do you have grandchildren?

Q: Tell us about your wife.

A: My first wife, Sybil, passed away giving birth to the twins while I was away in New Guinea, then I found another woman who was willing to take us all on. She was a sweet lady who did not call them step-children or herself their step-mother.

Q: Who did you think had the most influence on you growing up, and what did you learn from them?

A: My dad, without a doubt and I learned how to be gentleman from him. People are surprised these days — when someone walks up to the table, I stand up, I don’t just sit there. Those are little things that some people don’t think are important, but I do. My father ran a gasoline service station, and when people here in Texas would ask, I’d say he was an oilman.

Q: What were some of the lessons you learned in the military?

Q: Did you stay in touch with the men who served with you?

A: All of the WWII buddies I have outlived, and quite a few of the Vietman vets, too. When I think about it, I don’t even know who will be my pallbearers!

Q: How were the two wars different?

A: In WWII we felt we had an objective; we knew what we needed to do — to win and claim our country back. Vietnam, I don’t think we knew what we were doing there, and you didn’t know who the enemy was. I recall working on the highways and we worked alongside some of the locals, and the next day the ditches [we dug] would be all filled in. I don’t know what our true objective was. We could have won, in my opinion.

Q: What lesson have you learned that you would like to pass on to your grandchildren and great grandchildren?

A: Honesty. Be honest in most all your dealings. Sometimes my honesty got me into trouble, sometimes it’s hard to explain why I’m so honest when everybody else wanted me to be quiet. But my kids learned well — they never left money lying around, and told us if they were going out with friends, they told us which ones they were going with.

Q: What’s one good thing about getting older?

A: I guess it would be that you can continue to love people and make friends. I have been here four years, met a young lady here, but we were both on military pensions, so we lived together two years, then she had family problems and had to go back home. We still see each other, though.

Q: What’s the tough part about getting older?

A: I didn’t know till the last six months, but now that my health is failing — it’s hard to accept that. I tire easily and have stomach problems. I used to dig ditches! I had to get an EKG and they have to look into that. But it has only been less than a year.

A: Not much anymore, but I used to do woodworking and I even took sewing lessons so I could do my own upholstering. I bought a machine and took lessons. I could even tailor my own trousers. When men’s ties used to be so wide, my instructor taught me how to make them narrow. I learned how to put in zippers. I still have my sewing machine, I used it a couple three weeks ago.

Q: Do you have any regrets?

A: I have a few regrets. I can’t think of anything specific, but maybe I’ve done things that I could have done better, just “I wish I hadn’t done that THAT way.” But that’s how you learn.

To read more stories like Hoyt’s, visit www.TheseEyesHaveSeen.com, or check back for our weekly resident interviews in the Sunshine Stories Blog.