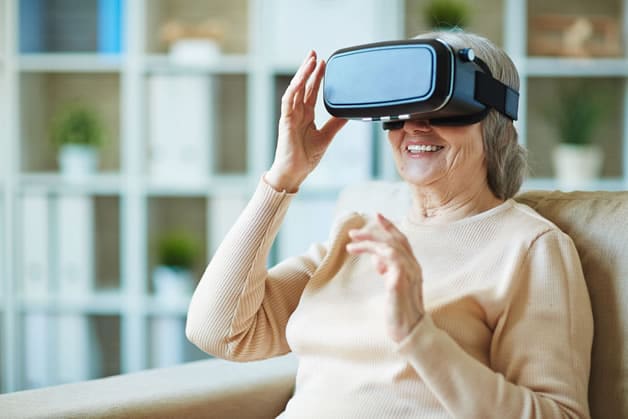 In 2020, now that travel has become increasingly restrictive (at least for the short-haul) it’s refreshing to learn that seniors living with dementia at Sunshine Retirement Living communities can now tour the world via virtual reality (VR). Their virtual adventures have included everything from swimming with sharks to going on an elephant safari to visiting the Louvre Museum in Paris or attending an opera for the first time.

Not only is VR therapy a stimulating and enjoyable way to spend the afternoon, but it also seems to unlock memories in people with dementia. Through VR, residents have had memory breakthroughs and recalled experiences from their childhood and important family memories that were previously lost because of their dementia, says Sarah Peters, Sunshine’s Director of Marketing. Although some residents choose simple virtual experiences, like walking on a beach or through a forest, that too often helps them connect to memories of family camping trips or other past events, she notes. In addition to its VR Bucket List program, Sunshine offers a weekly group VR program, which also has therapeutic benefits, she says.

The timing of Sunshine’s virtual reality initiative could not have been better, given that its communities have had to temporarily halt outside recreational trips and family visits to prevent the spread of COVID-19. VR therapy has helped relax and alleviate the anxiety of some residents, says Peters, adding that in a time of social restrictions, feelings of isolation and seclusion can be a big danger to residents. “Virtual reality allows the residents to get experiences away from the community. The group VR setting also gives them that sense of a shared adventure.”

This cutting-edge therapy integrates real-time computer graphics, body tracking devices, visual displays and other sensory inputs that resemble real-life situations, giving users the sensation of being in a different place than their actual physical environment. In a VR session at Sunshine, residents wear headsets while the Life Enrichment Director guides the experience with a handheld device. If families give permission, the hardware can be connected to a display for other residents to also watch and follow along in the experience.

Sunshine has expanded VR therapy to all assisted living, transitional assisted living and personal care communities as well as to some independent living places, with a goal of rolling it out to every community. “The response from residents and family caregivers to VR therapy has been fantastic,” says Peters.

Promising research on VR and dementia

Although research about the benefits of virtual reality on people with dementia is in the early stage, a 2019 study by the University of Kent indicates that it has huge potential. “It provides a richer and more satisfying quality of life than is otherwise available, with many positive outcomes,” said one of the researchers, Dr. Jim Ang, in this press release.

In the study, eight patients living with dementia used a VR headset to virtually visit a cathedral, a forest, a sandy beach, a rocky beach, and a countryside scene. One key finding was that VR helped patients recall old memories by providing new stimuli. For example, one patient recalled a holiday after seeing a bridge that reminded them of that trip. At an art session, some weeks later, one patient was inspired to draw a seaside picture.

To get a sense of just how exciting virtual reality can be, check out this video and article about the VR program at Sunshine’s Azalea Gardens Assisted Living and Memory Care in Tallahassee, Florida. In the video, resident Bobye Townsend virtually experiences a space shuttle ride and re-experiences a SCUBA adventure on the Great Barrier Reef from decades ago. She absolutely beams with joy as she describes her VR excursions: “It was the most amazing thing that’s ever happened to me, and I’ve done a lot of things and been a lot of places,” she is quoted as saying.

To learn more about residency or to schedule a tour of Azalea Gardens, contact our friendly team today.